An example from Perranporth, the rock formations reveal exposed greisen veins and are part of the Porthtowan Formation of Devonian Rocks

A red star dwarf, forty light-years from Earth in the constellation of Aquarius:Fractionally larger than Jupiter in diameter and known at the time of writing to have seven Earth-sized terrestrial planets in its orbit. The image shows the star as it might appear from the surface of its outermost planet: simplistic, yet starkly dramatic with its diffused atmosphere, the star and bare rocks 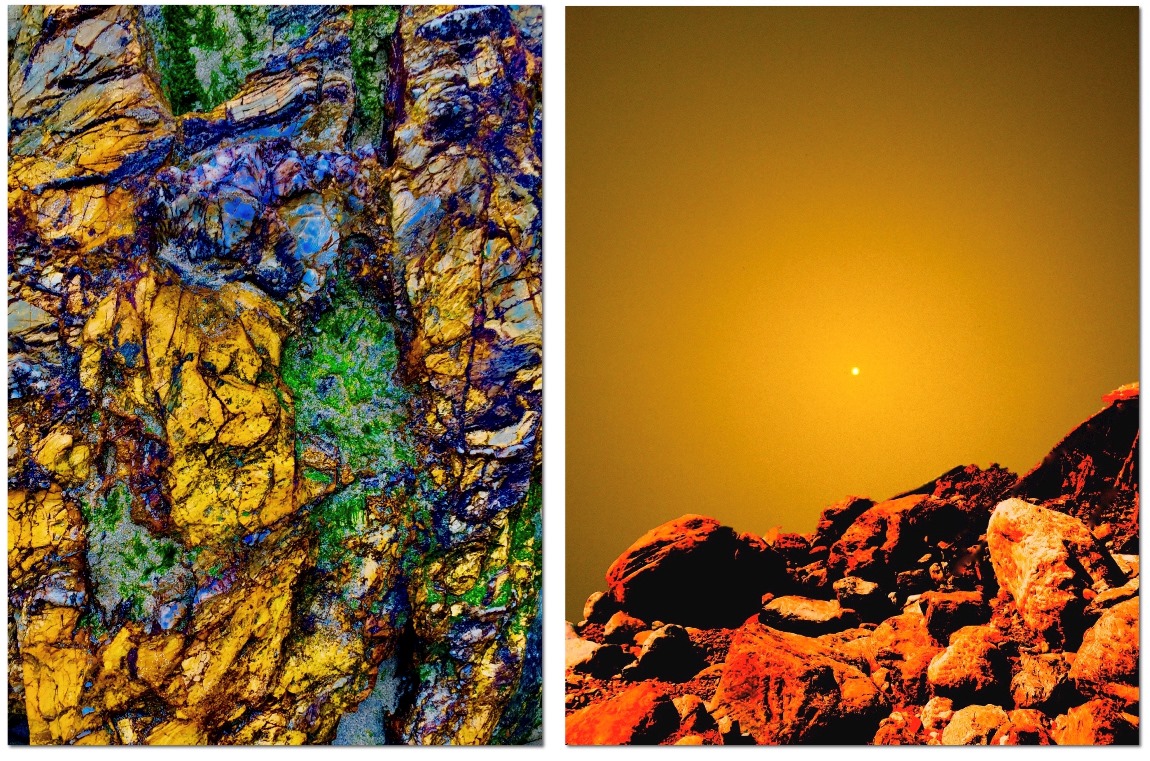 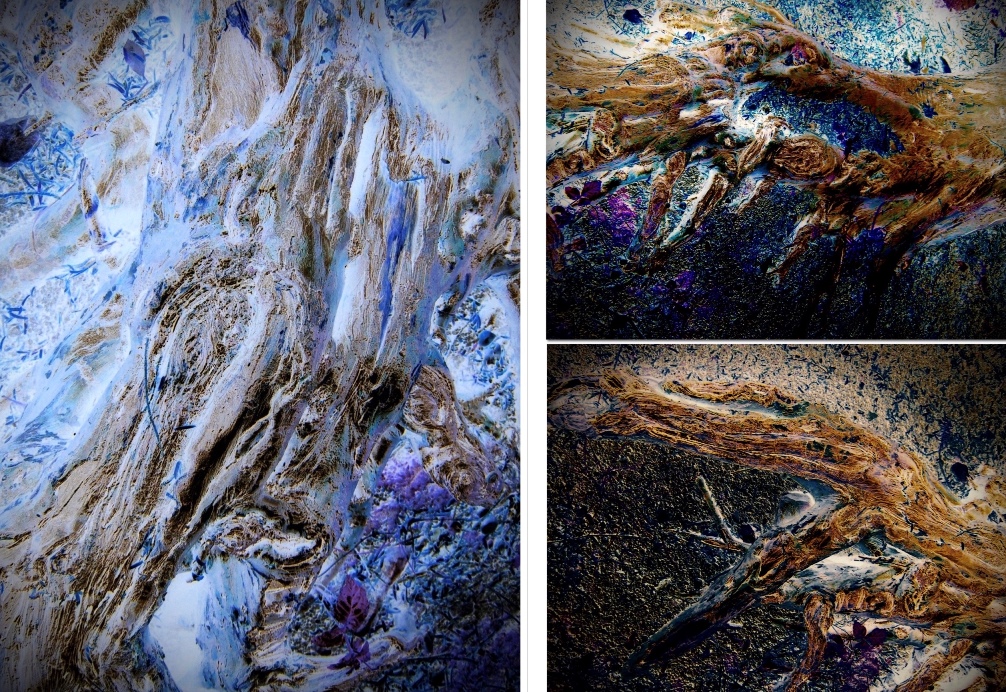 In collaboration with the British Museum of Natural History, a research project involving the analysis and visual reconstruction of palaeo-invertebrates, species recently evaluated and never previously illustrated, the imagery contributing significantly to new knowledge related to evolution and the origins of life. These are so-far unidentified microscopic zooplankton, analysed from the observation of particles, fossils and sediments from a seabed fauna-bearing ecosystem, dredged from the deepest part of the North Atlantic Ocean by the HMS Challenger Expedition of 1873. At that time, scientists believed there to be no life on the ocean bed 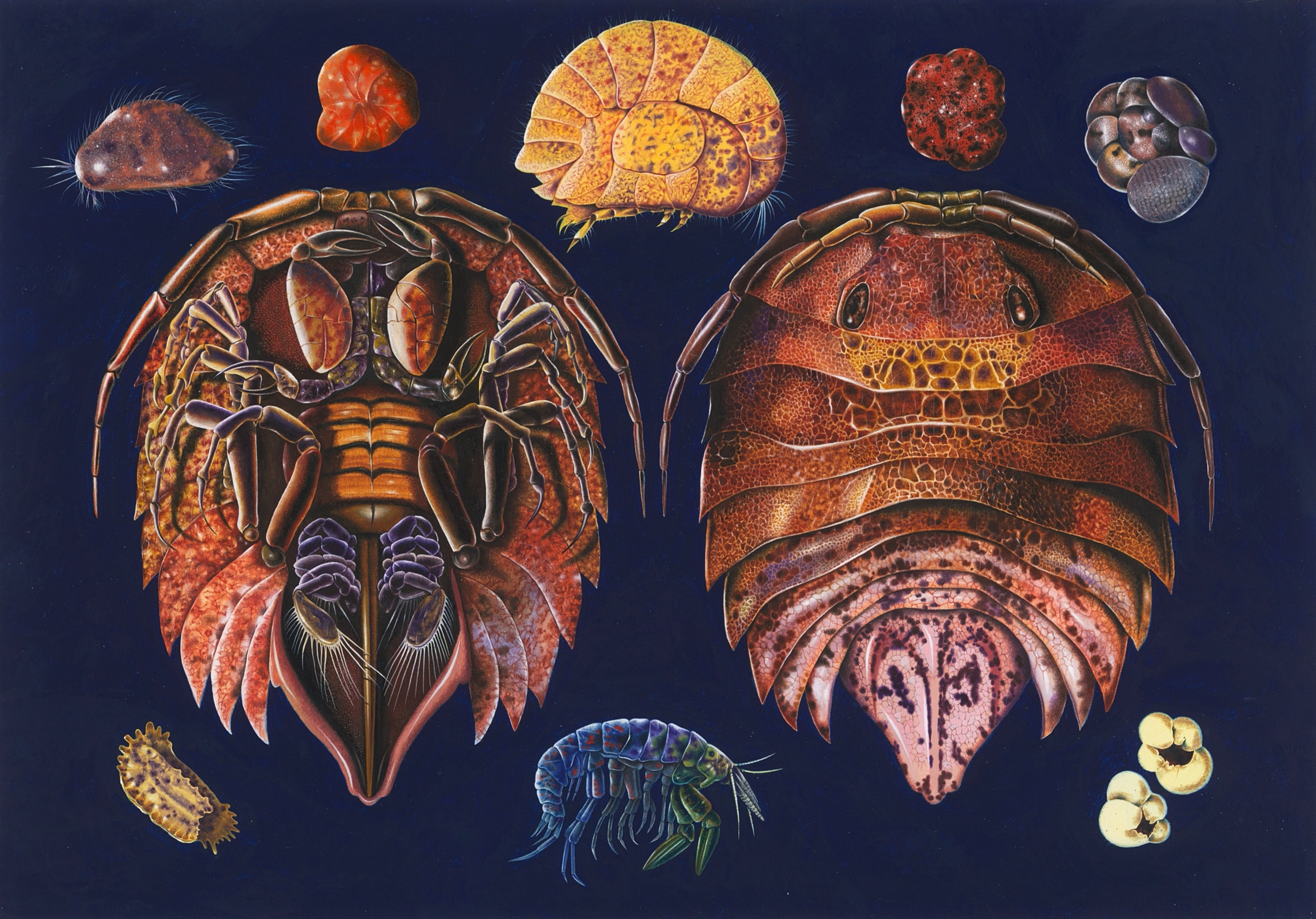 The lower image is the original and first illustration of Keurbosia, an enigmatic, marine invertebrate from 500 mya thought to be a forerunner of the earliest vertebrate creatures to evolve. The accompanying sequence depicts the fossil of this hitherto unknown prehistoric organism, a visual dissemination of its anatomy and the final pencil drawing showing form, structure and ambiance.

The smaller illustration is of Typhloesus, an enigmatic aquatic organism from the Carboniferous period. Believed to be voraciously carnivorous, the fossil evidence points to a large eye on each side of its body used to detect its prey. Both projects undertaken in collaboration with the University of Leicester 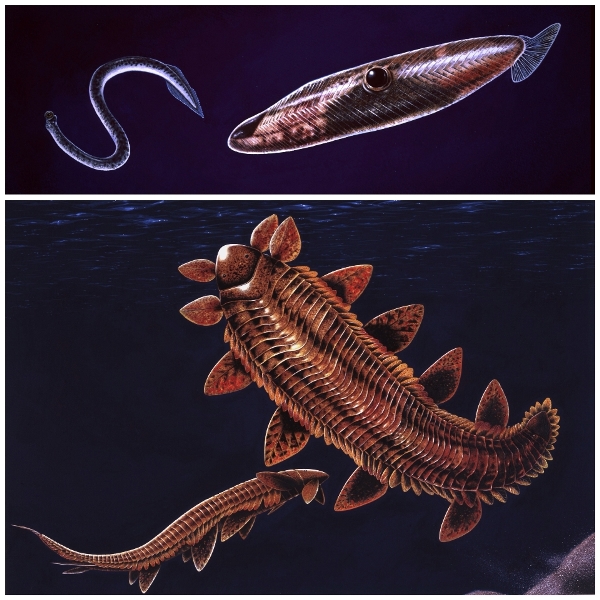 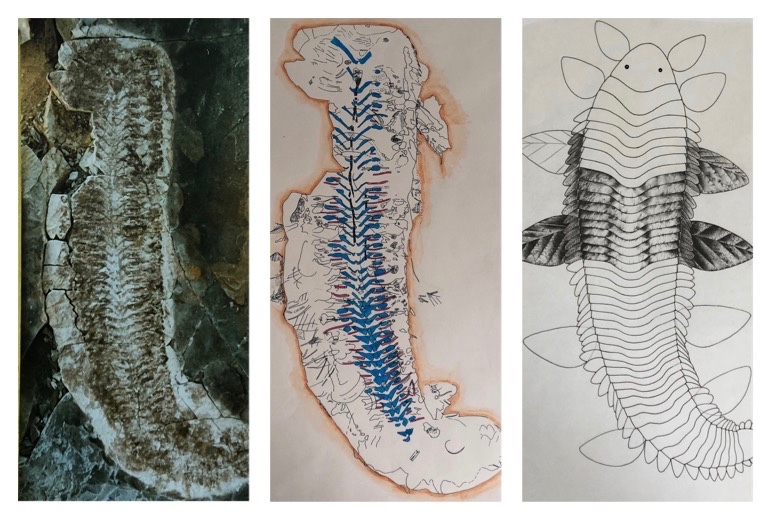 This illustration depicts a shallow seascape from the early Ordovician Period known as the Harding Sandstone Formation of Montana. Teeming with emergent evolutionary life, a large shoal of fish dominates the scene. These fish are known as a Pteraspidomorph agnathans and are specifically named Astraspis desiterata. Although many other fish-like forms have appeared such as the shark in the background, Astraspis is considered to be the worlds first ever fish. Produced in collaboration with Birmingham University and the Lapworth Museum 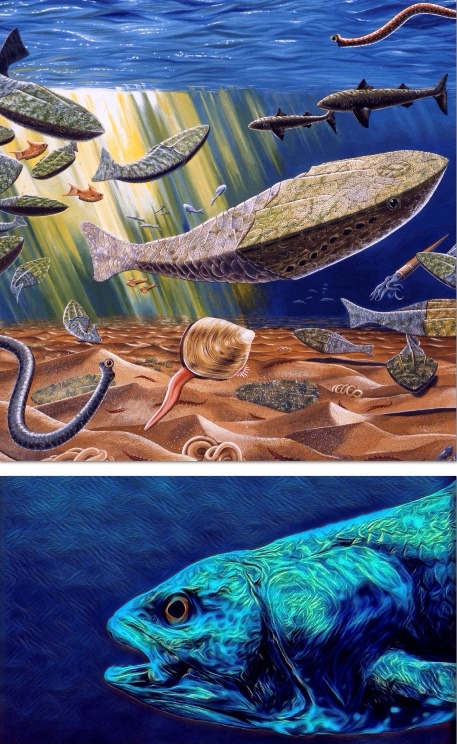 An illustration borne out of primary research with prehistoric organisms recently discovered being shown for the first time. An evolutionary procession passing through the Carboniferous Period (358 – 298 mya): A composite arrangement showing the complexity, confusion and texture of a teeming coal forest ecosystem.

The enlarged bottom section shows Meganeura, the largest flying insect known to ever exist having a wingspan of over three feet (one metre). 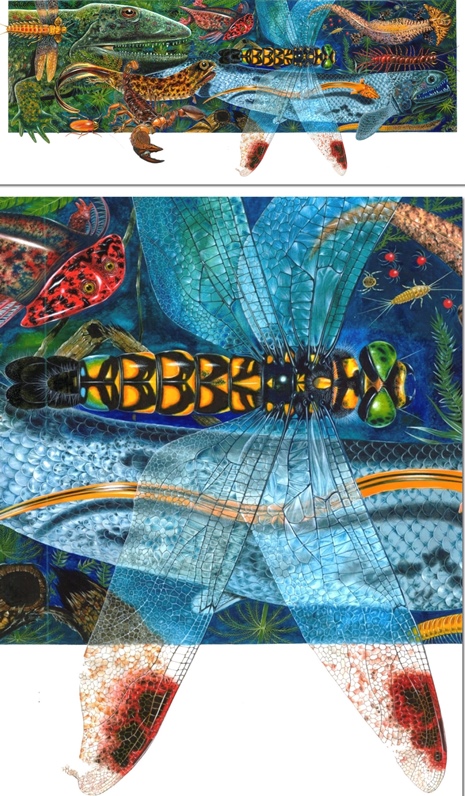 These are two contrasting scenes comprising fauna and plant life from the end of the Cretaceous Period, moments prior to when dinosaurs and many other species became extinct. The lower illustration is principally a re-analysis of the top picture,part of an acclaimed mural to be seen in the Peabody Museum of Natural History at Yale University and depicts a geologic timeline, produced by illustrator Rudolph Zallinger between 1948 & 1951. The lower image shows how contemporary theories and research have re-assessed dinosaur morphology, movement and aspect. Produced in collaboration with Yale University and published in their alumni magazine and website 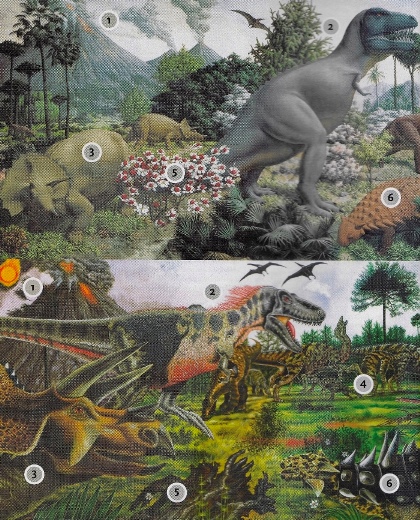