Left: ‘Balor’, Demon Cyclops and God of the Dead in Celtic Mythology. Can kill a person just by staring at them
Right: A Legend of English Folklore: ‘Hern the Hunter’
“Hoof and horn, hoof and horn
All who die will be reborn
Corn and grain, corn and grain
All that falls will rise again” 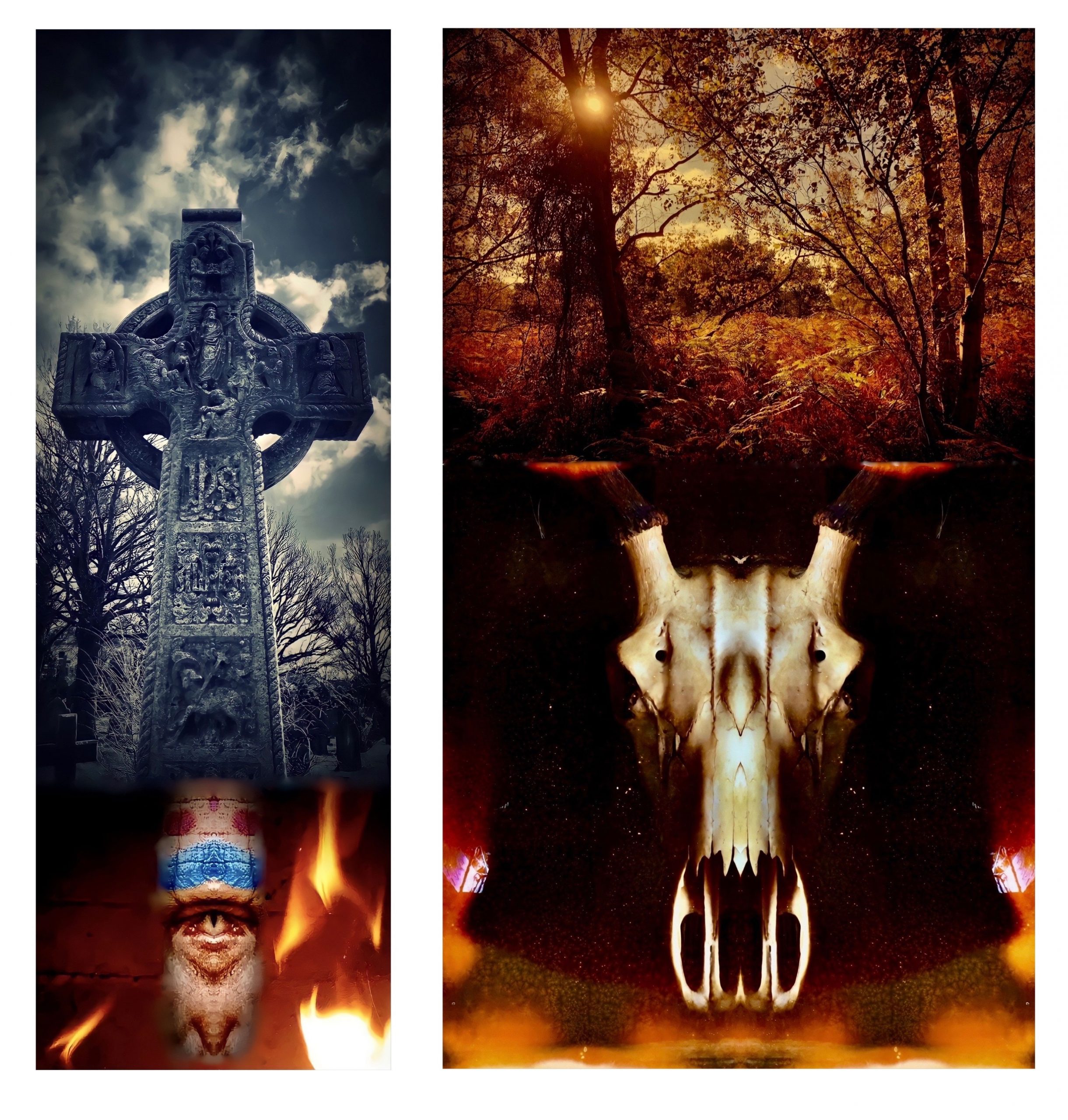 Religion and the Denial of Evolution

The subject of human evolution has inflamed much argument and debate since it was first brought into the scientific spotlight in the early nineteenth century. Even today, communities and societies throughout the world are offended by the whole concept because of religious belief. This is a deliberately provocative image its remit is to convey the notion that the origin of life began in ancient primordial seas about 4 billion years ago as a chance natural process that synthesised various chemicals into self replicating molecules, the upshot being that all living organisms- including humans- could share the same genetic source! 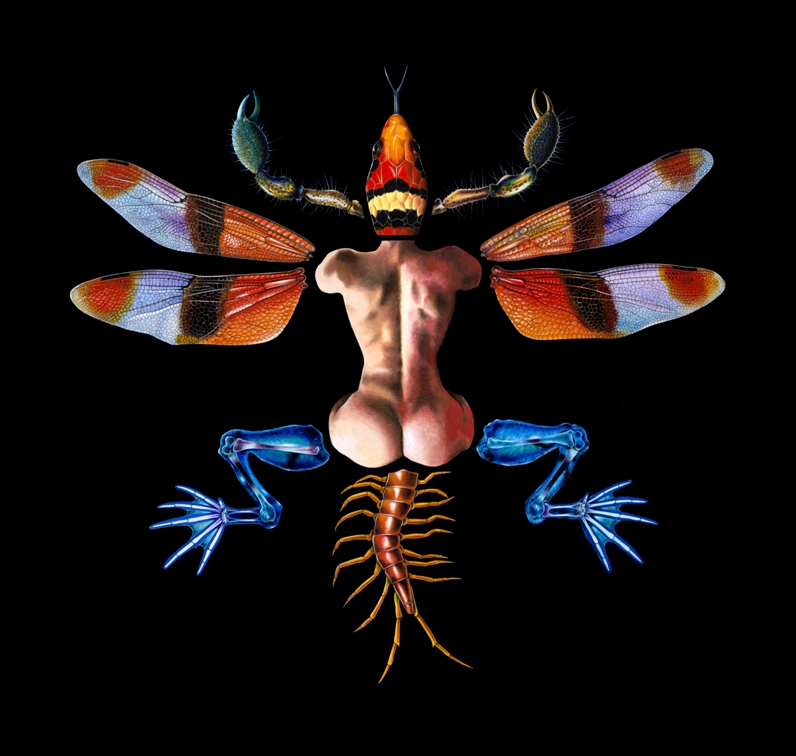 A Stained Glass Window for the Church of White Supremacy

A hard hitting and deliberately shocking commentary on the rise of Neo-Nazism and the hypocrisy of the Christian Right Wing: WASP, acronym for White, Anglo-Saxon, Protestant! The blue-eyed Caucasian baby represents the neo Nazi ideal for the Aryan Race and their commitment to breed pure ‘Nordic’ offspring. The boy, painted in a manner reminiscent of the Renaissance religious frescoes that include cherubs, depicts neo Nazi ‘macho swagger’, his excited state conveys virility and the potential to procreate accordingly. Also, the wolf’s head tattoo on his chest is a symbol used extensively by far-right groups around the world. The pattern on the wasp’s wings symbolises the bodies of concentration camp victims; neo Nazis are notorious for their Holocaust denial. The wasp’s body is imbued with various symbols including the white cross and blood drop of the Klu-Klux-Klan on its face. Might the single grasping hand at the base of one of the wasp’s legs represent the final act in a Kafkaesque nightmarish metamorphosis; the rapid and final disappearance of human decency and egalitarianism? 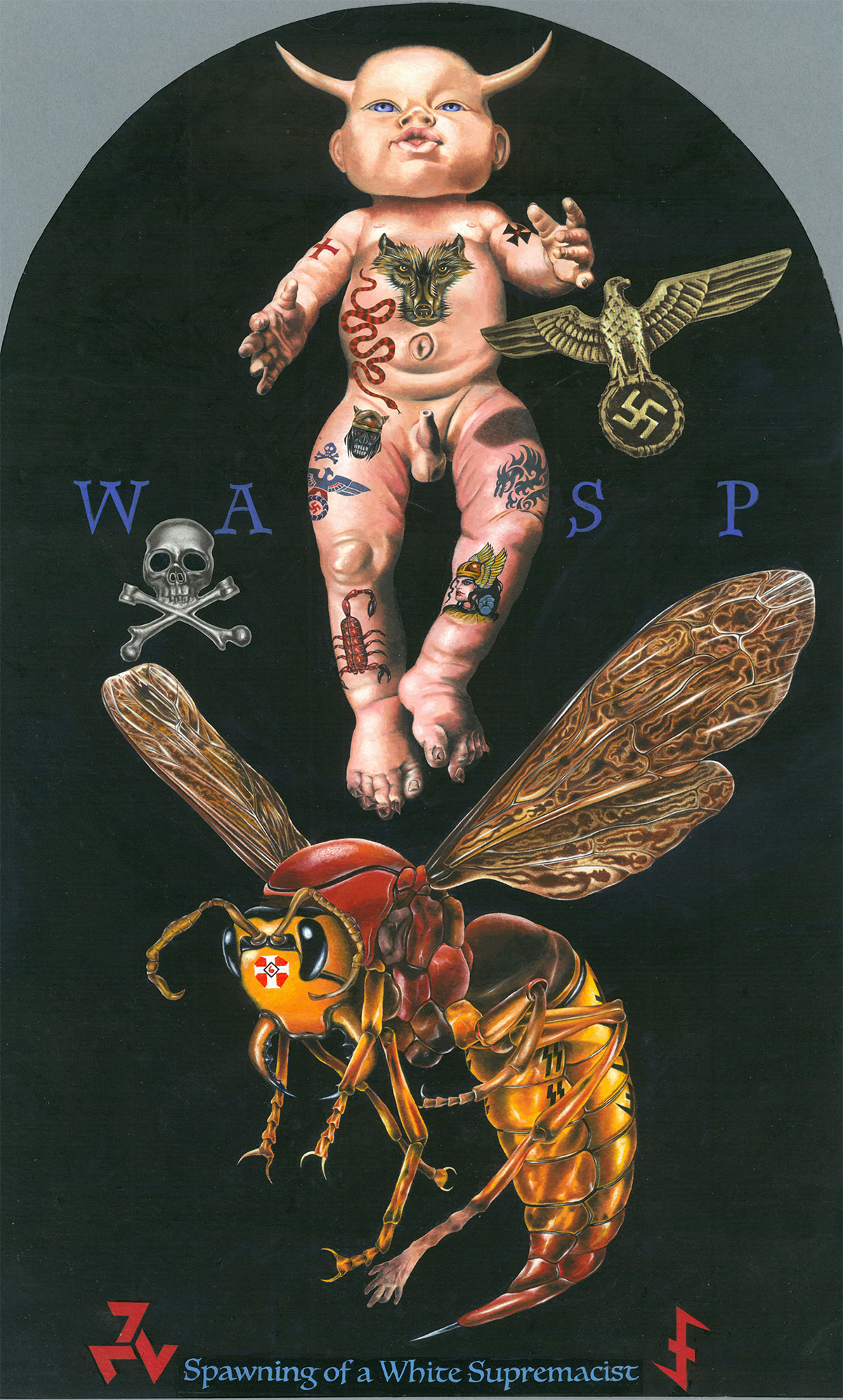 A concept depicting ecology and interaction within the South American rain-forest: Visually, all animals are to scale: Recipient of the Gold Award (Book Category) from Society of Illustrators Los Angeles, ‘Illustration West 41’, 2002 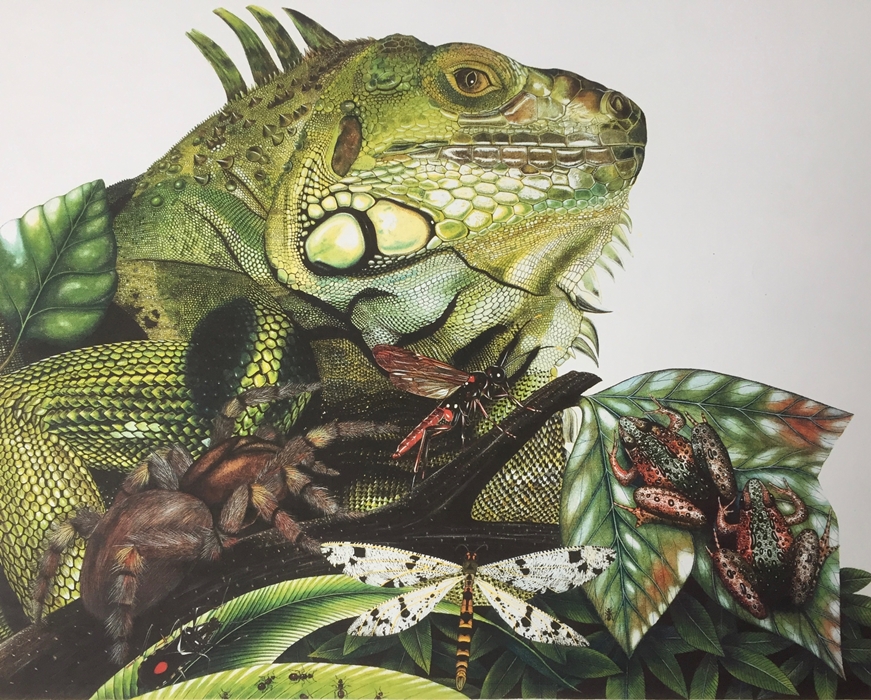 A selection of reptiles and amphibians from around the world: The Longman (UK), MacMillan (USA) ‘Illustrated Animal Encyclopaedia’ (1982) 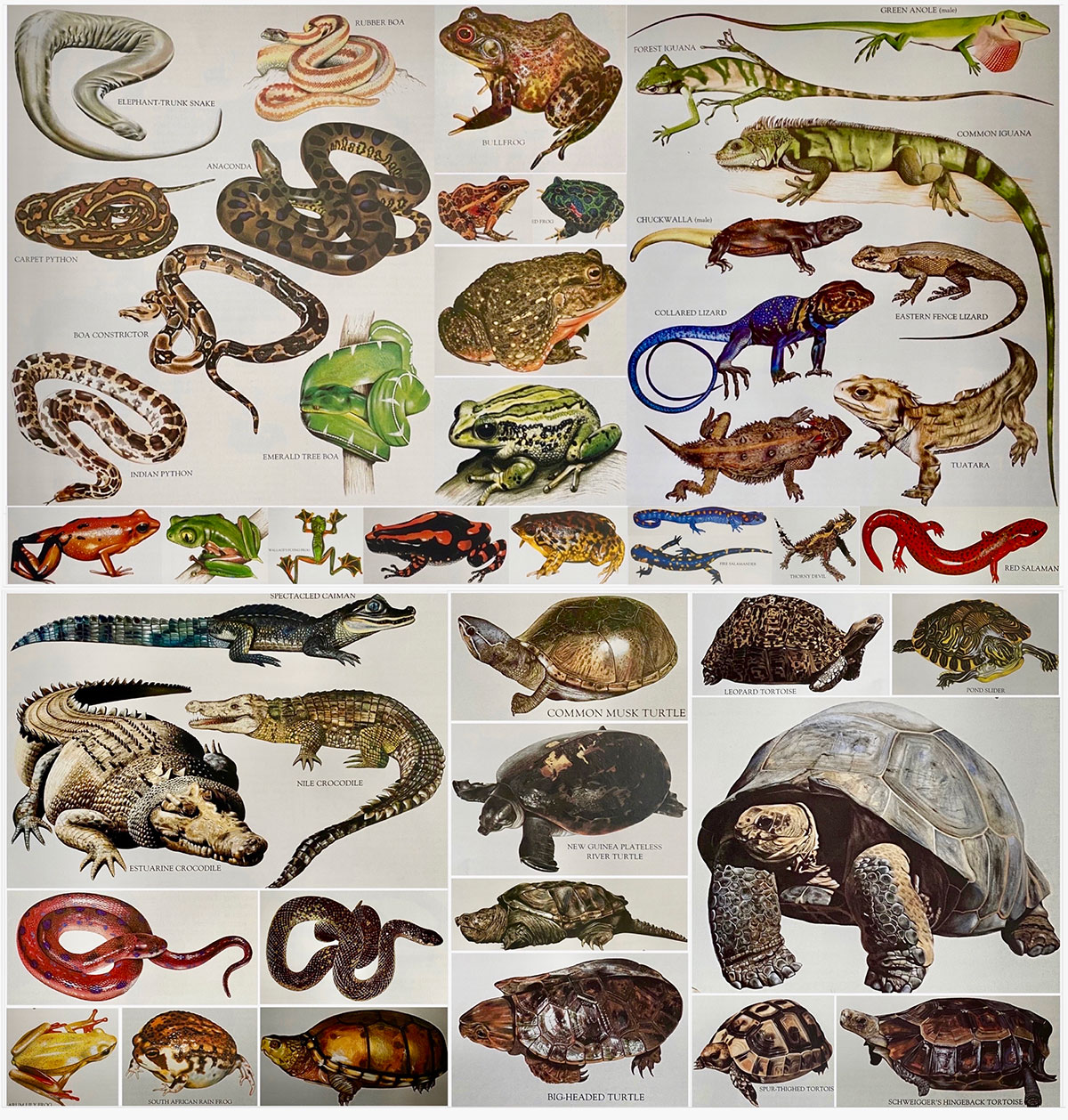 A chimeric arthropod conceived to represent a range of harmful, crop destroying insects: International advertising campaign for ICI Crop Protection; the agency was Ogilvy and Mather 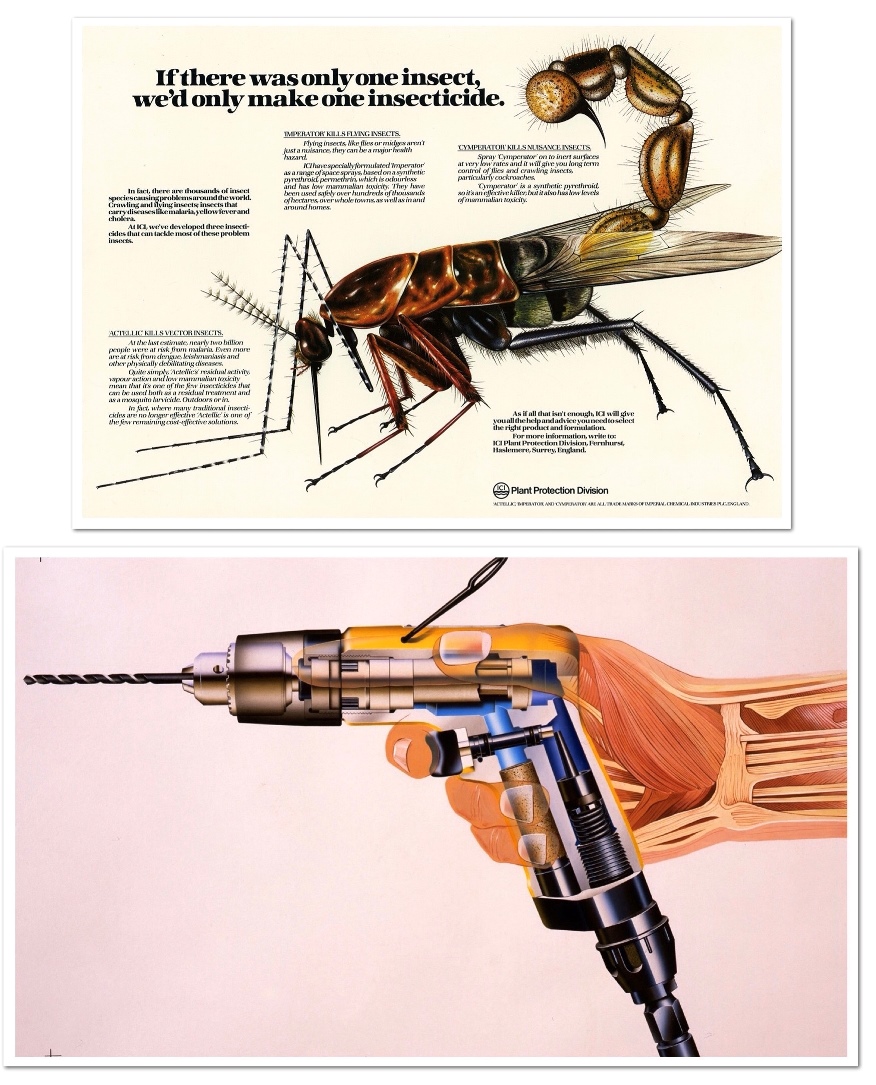 No. 32 Penguin (UK) 2019: the original artwork is contained in the historic Ladybird Book National Archive. The supplementary image shows visual development and conceptualization.

An image inspired by the attention to detail and symmetry of design given to 19th century natural science illustration: this image is homage to the great natural philosopher, polymath and illustrator Ernst Haeckel: from Octopuses: A Ladybird Expert Book 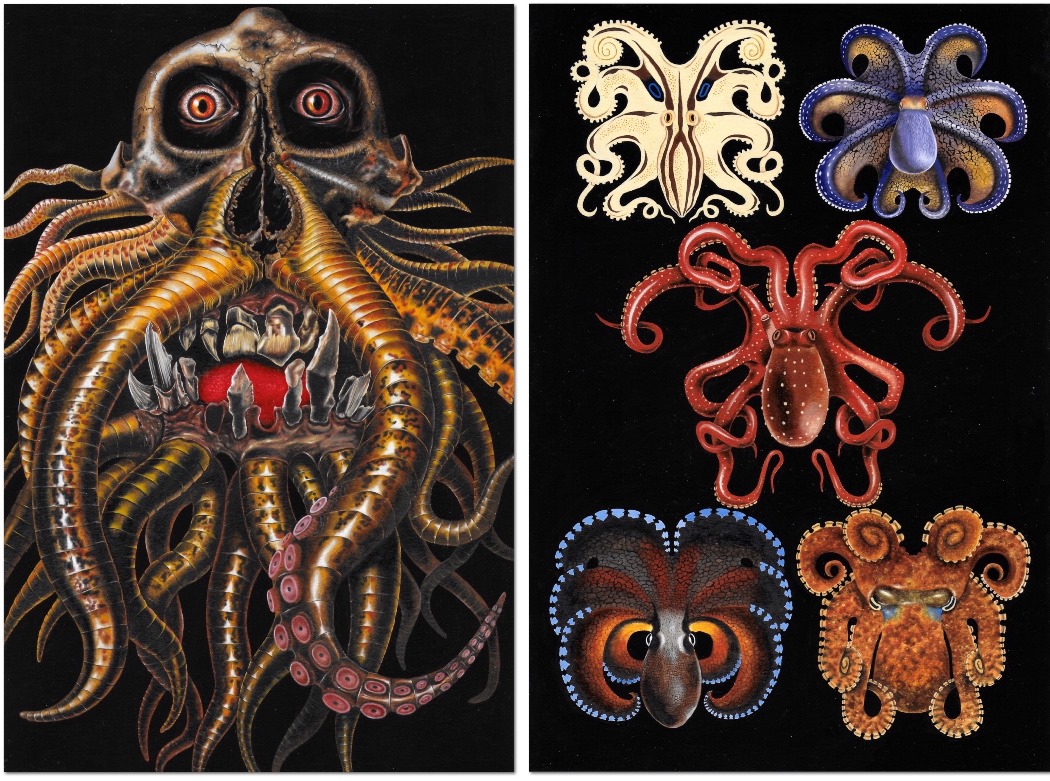 Many myths and legends have been inspired by octopuses and their relatives the squids: none more so than The Kraken, which lurked in icy seas surrounding the coast of Scandinavia: from Octopuses: A Ladybird Expert Book

Octopuses have evolved to solve problems, to navigate and to communicate: This illustration is a humorous referral to octopuses’ perceived high level of intelligence: from Octopuses: A Ladybird Expert Book 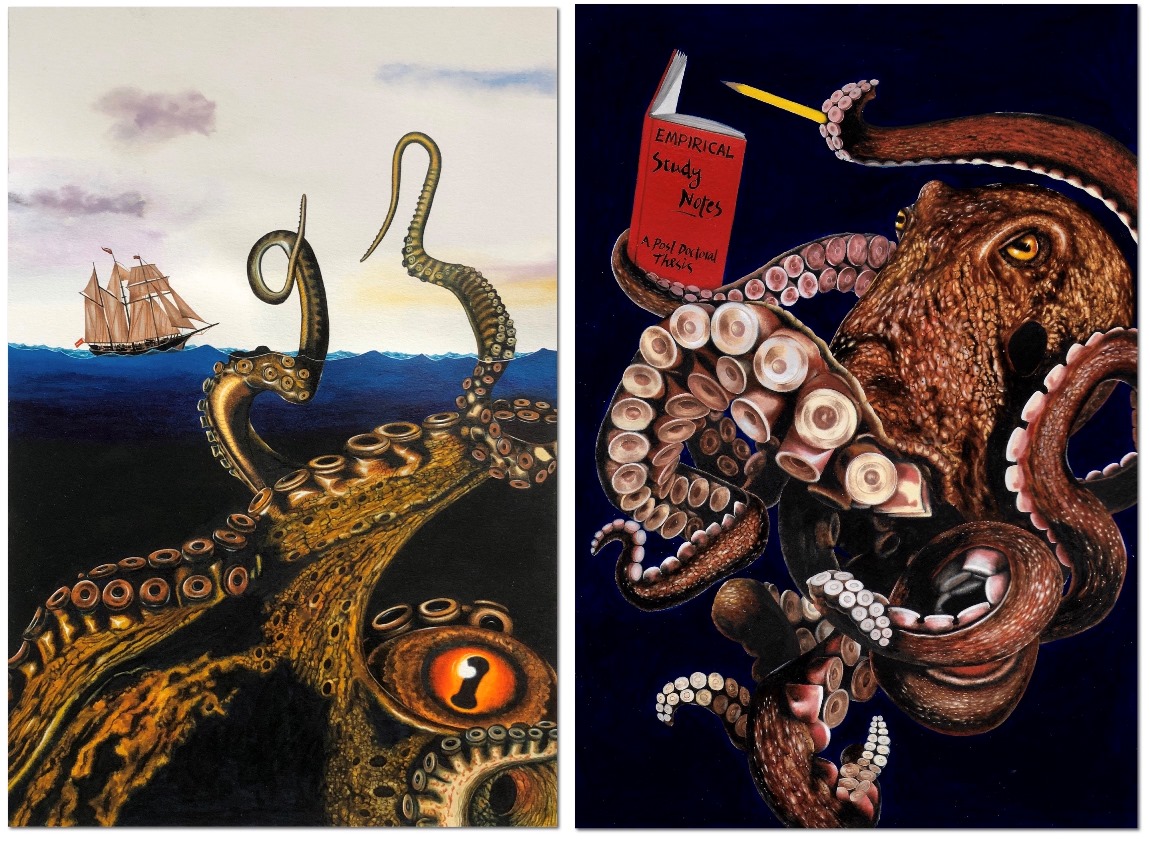 A Wunderkammer of Madness

A museum of the future has created a cabinet of curiosities that reflects upon the time we live in today: stylistically gothic and demonstrably provocative, the illustration is produced to challenge certain sensitivities that could possibly be seen as censorious by some. A concept inviting people from future generations to think about a range of narrative constructs that has dominated our life so far in the third decade of the twenty-first century. Subjects covered include the coronavirus pandemic; the preponderance of heinous crimes and unnatural practices; racism; cancel culture and the increase in puritanical offence driven censorship; unethical science and suspect laboratory experiments; immoral behaviour in the eyes of some. 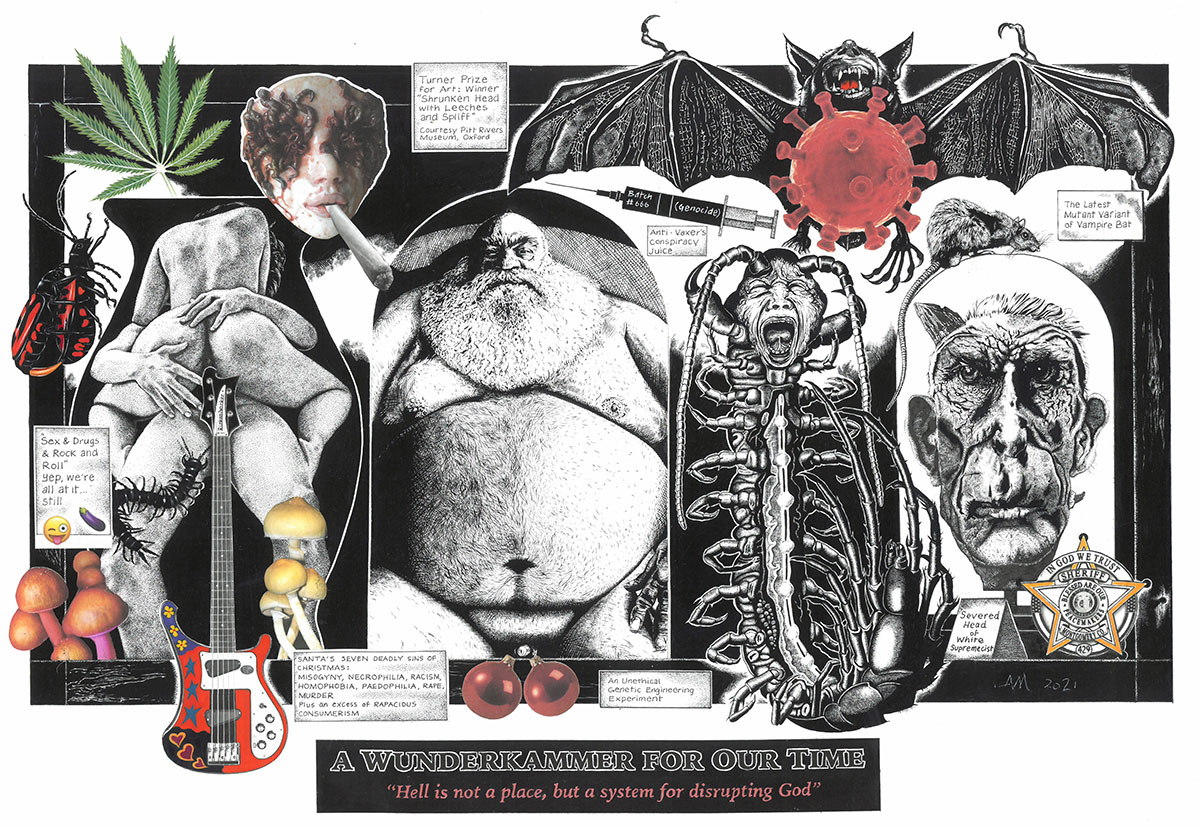 Narratives from History 1: The Norman Conquest of England, 1066.

Pevensey Castle, Sussex, England: the first Norman castle built after the 1066 invasion. The setting is the actual site where William of Normandy and his troops landed before heading approximately 9 miles (14K) northeast to confront the battle-hardened Saxon army under the command of the last English monarch, King Harold II. The Saxons very nearly won the Battle of Hastings and only lost because of a tactical error. The battle changed the course of English history forever. The Normans introduced the Feudal System whereby most ordinary people became ‘owned’ by the Baronial landowners who in turn, went on to become the titled aristocracy we have today: the class system was well and truly born! Also, William was the most tyrannical ruler England has ever had, setting about the genocide of his Saxon subjects, brutally murdering thousands of innocent men, women & children. 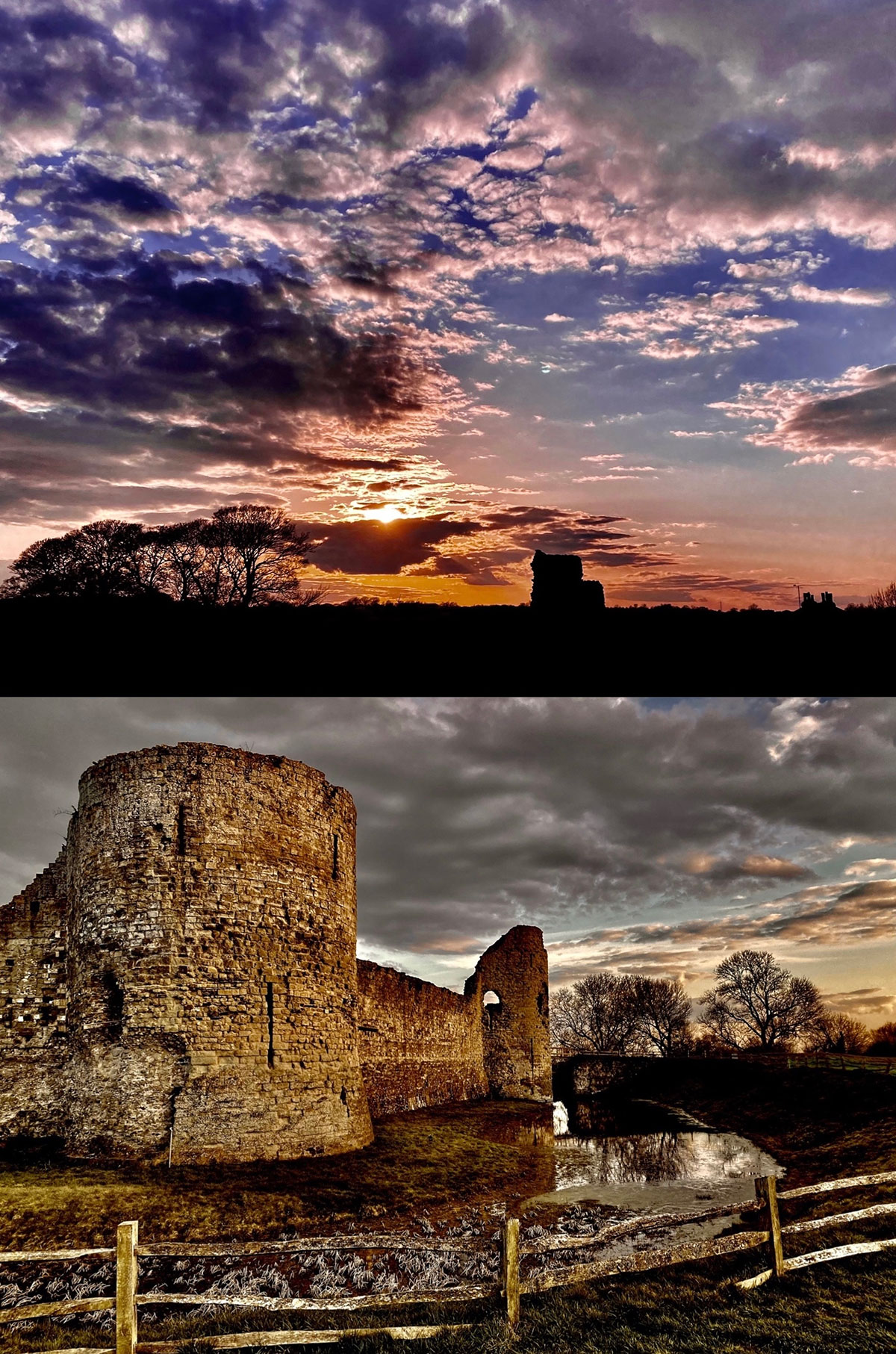 Narratives from History 2: The Church, Black Death and Witchcraft!

The Medieval Period gave rise to innumerable myths that in turn, became diktats for a ‘God-fearing’ existence. This brought fear of chastisement and retribution from the church: Hell and damnation awaited those who ignored the path of righteousness! The Black Death was once thought of as a punishment from God for straying from such a path and living blasphemous and wicked lives. Shown here is a Plague Doctor, whose appearance alone would have instilled fear! Parallel to this, witchcraft, the exercise or invocation of alleged supernatural powers to control people or events, involved sorcery or magic. Meeting secretly, usually at night, crones would indulge in satanic rites with the Devil. Also depicted is the ruin of a church from the period in question, dominating the summit of a hill called ‘Burrow Mump’, located on the Somerset Levels in South West England. The former site of an early Medieval Norman fortification it is intensely atmospheric and brooding, strategically overlooking the moors and the flood plains across to Glastonbury Tor, the legendary King Arthur’s ‘Isle of Avalon’. 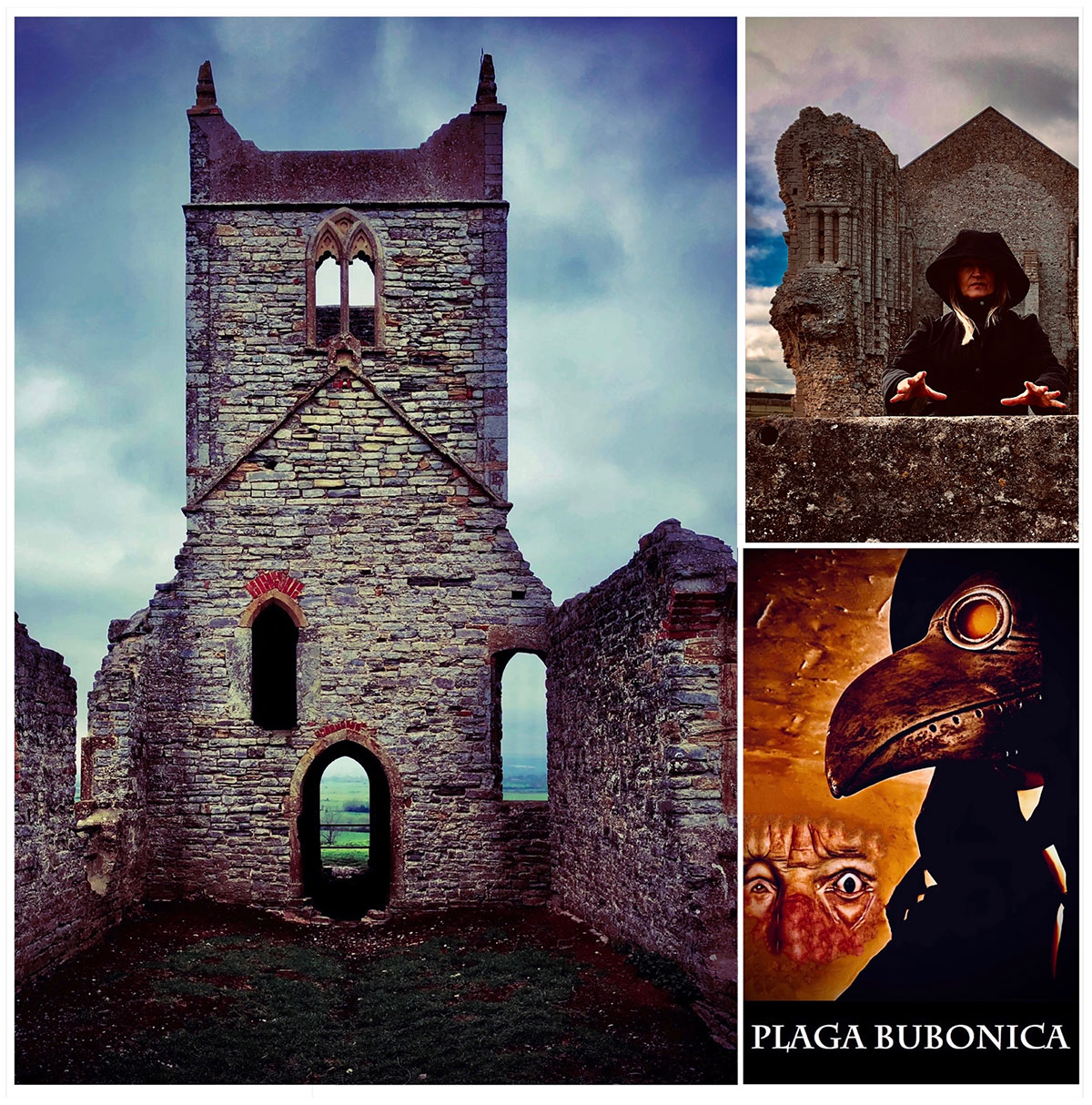 Narratives from History 3: English Civil War, The Battle of Naseby 1645

The Battle of Naseby was fought on the 14th June 1645, Northamptonshire, England. Considered the most important battle of the English Civil War, it resulted in a crushing defeat for the Royalist army of King Charles 1 by the vastly superior Parliamentarians commanded by Sir Thomas Fairfax and Oliver Cromwell. The king lost all of his artillery and 500 officers killed. The aftermath concluded January 1649- the King was beheaded for treason.

The danger and lived experiences of those coping and dealing with The Blitz. The common term for referencing prolonged periods of bombing on British towns and cities by the Luftwaffe that so often resulted in in the severe loss of civilian life and urban destruction. 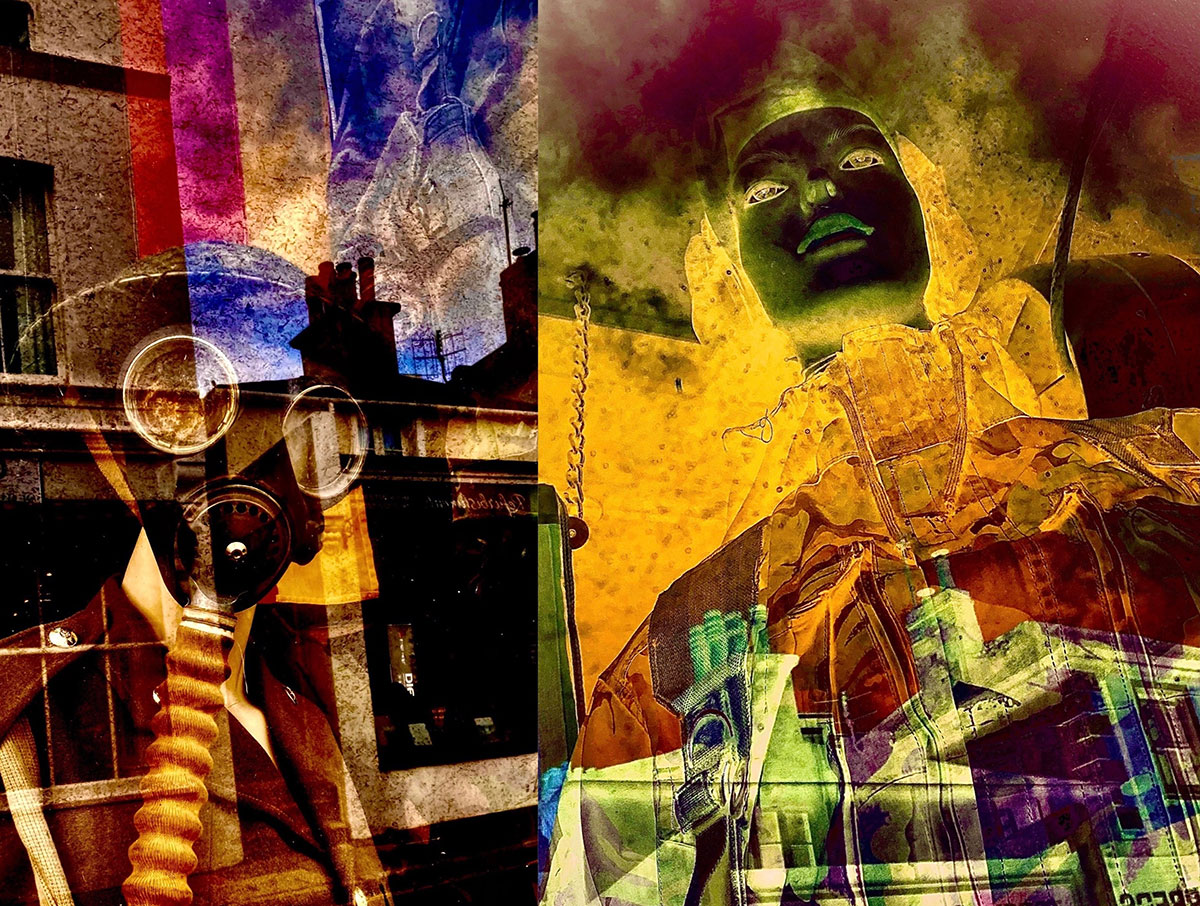 Sunrise over the English Channel: Looking out from Beachy Head: atmospheric, tranquil and reposeful, gentle swirling mists casting shadows over the sea. 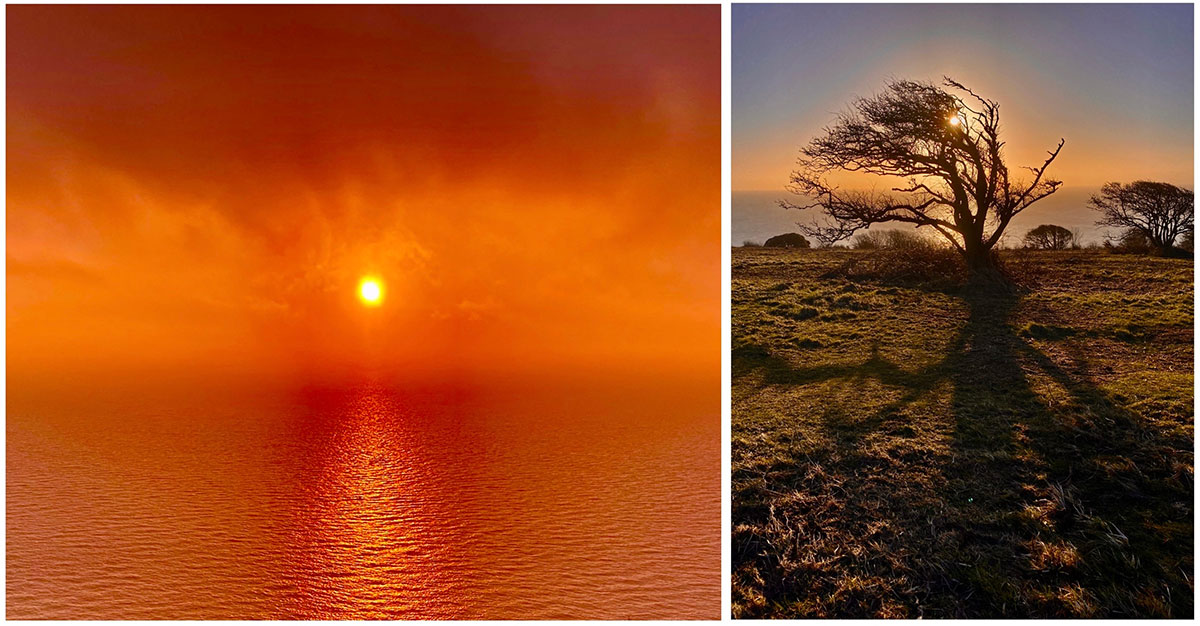 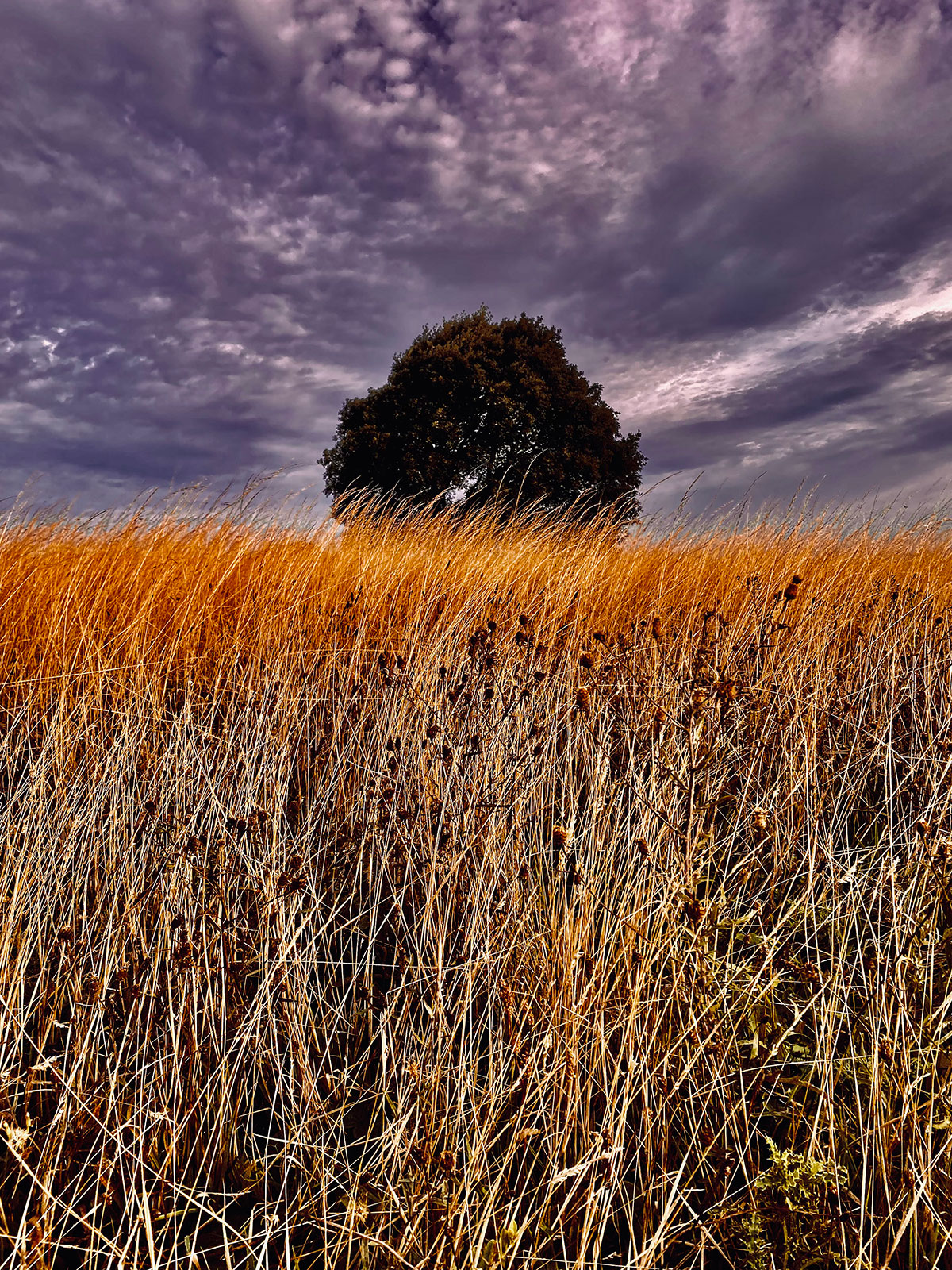 A winter’s atmosphere of silence and chilled air: The lone tree (right) is motionless, yet a living and giving ecosystem 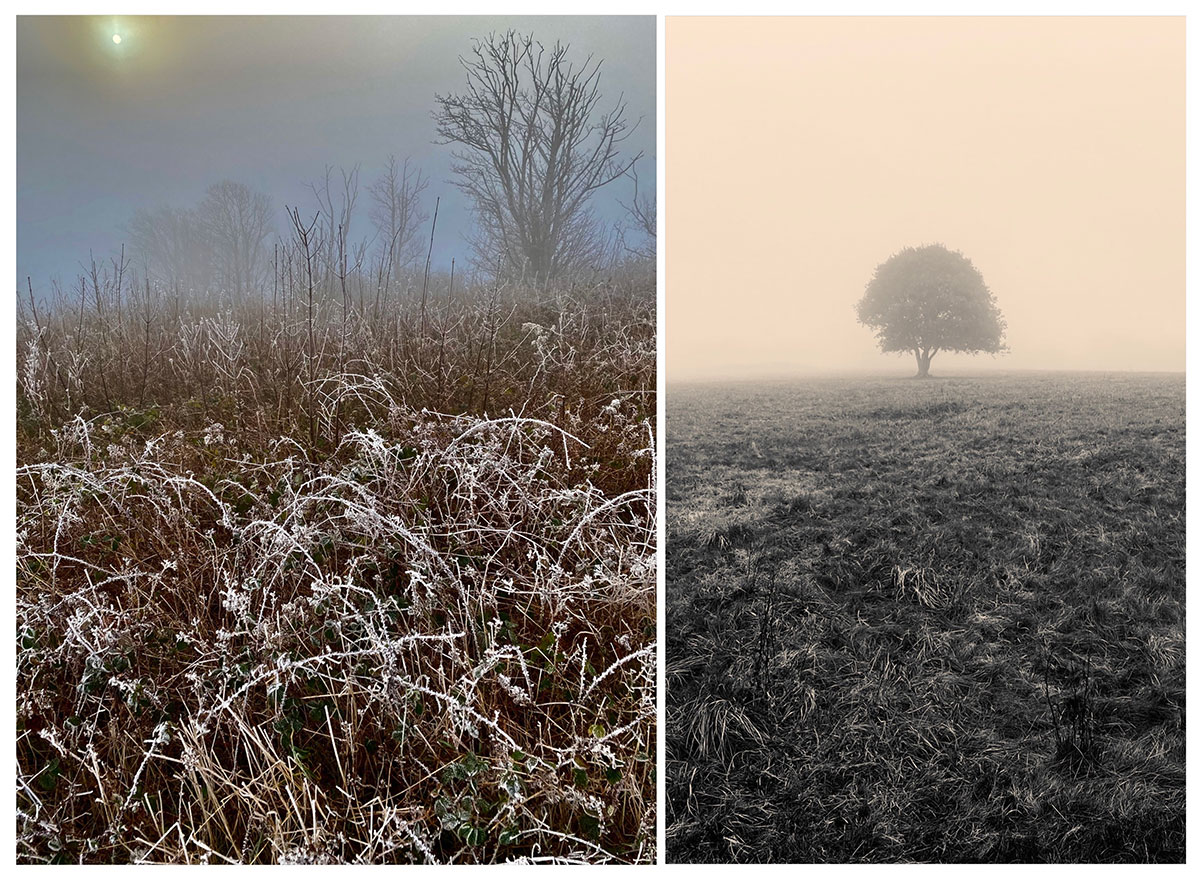 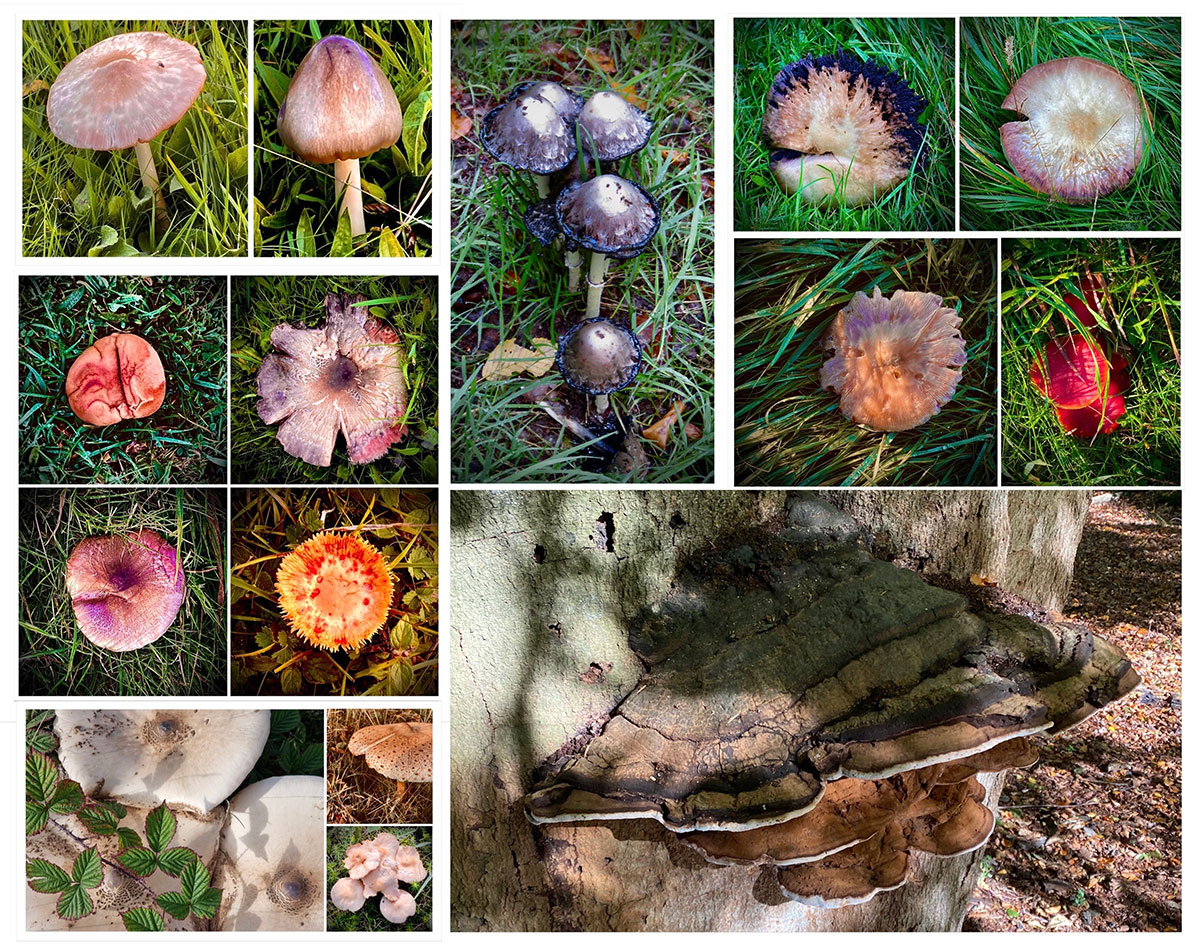 Variations in Architecture: Portugal and Australia

Architecture and the built environment are subjects that have engaged artists for centuries: a composite of contrasting forms from Braga, Portugal- a contemporary design indulgence, 20th century dilapidation and a medieval townscape. Blue House – in the Portuguese coastal town of Aveiro: published in Illustration: A Theoretical and Contextual Perspective (Revised and Second Edition), Bloomsbury, as part of the chapter dealing with visual language, the image sets out to confirm that the method of production for hyper-realism is immaterial to the successful remit of any given brief, the illustration shown could be rendered exactly as shown by using a variety of techniques and media such as opaque painting like oil and acrylic or by digital media. Instead, the image was captured on camera. Also published by Bloomsbury on the cover for their visual arts catalogue. The bottom illustration is an urban-scape from the coastal city of Newcastle, New South Wales, Australia. 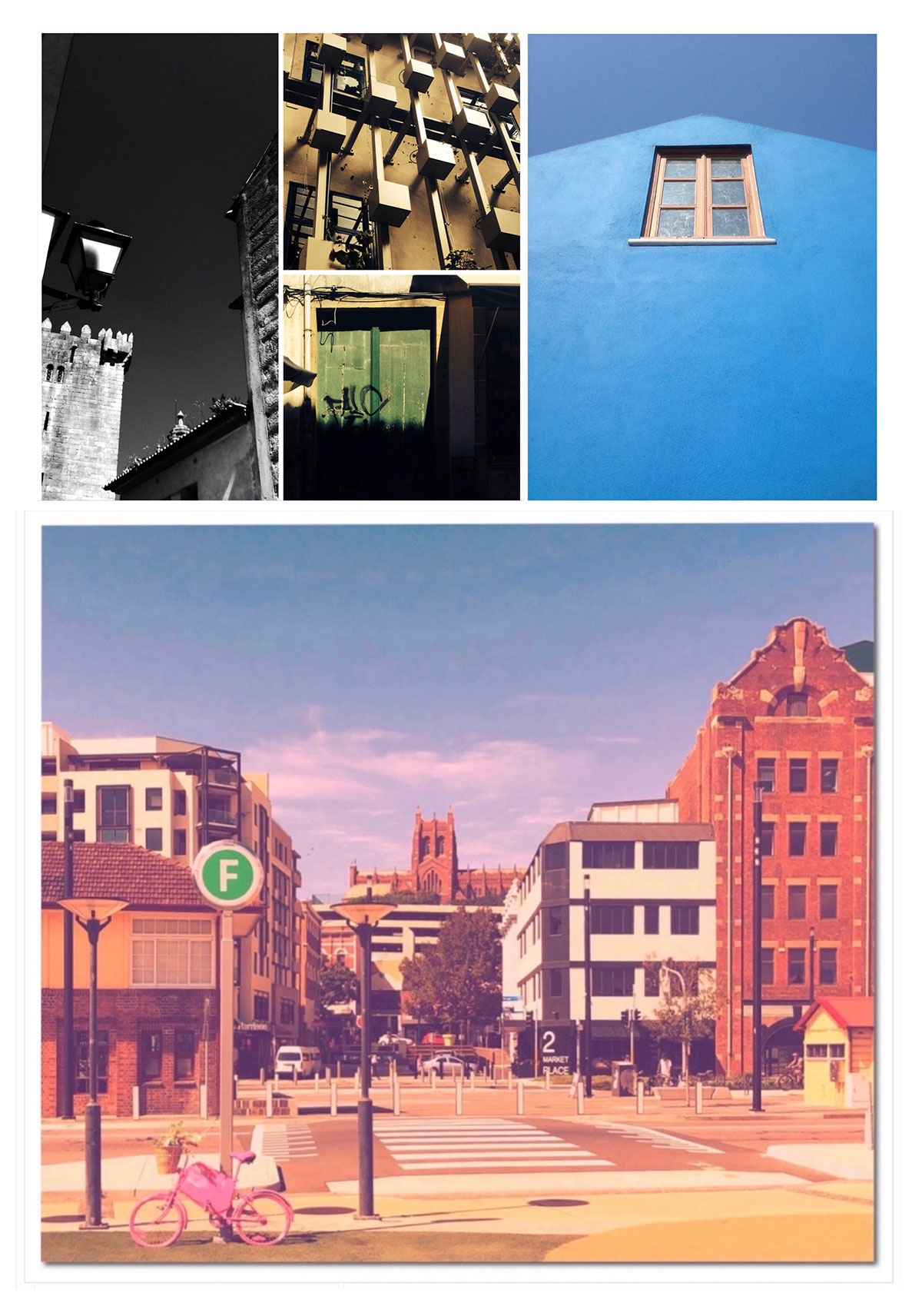